Geraldton – The gateway to the Abrolhos Islands 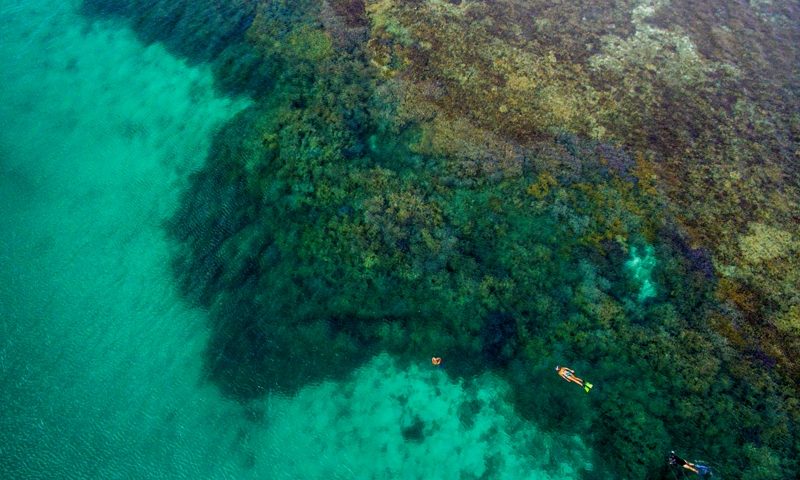 Summer has been mild for a change in Geraldton but our Harbour Cruises have been hot with many celebrations being had including birthdays, anniversaries, business group bookings for social clubs and many more just celebrating life in our great city of Geraldton. The Eco caters for 140 passengers with live music, mouth-watering meals 2 x bars, 3 decks taking in the sights of the Geraldton harbour  with magic sunsets that puts you in another world. Certainly gives Geraldtonians something new and exciting to enjoy 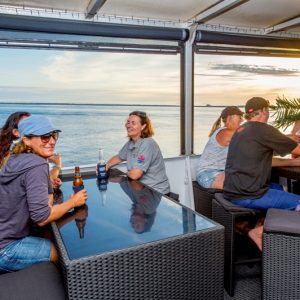 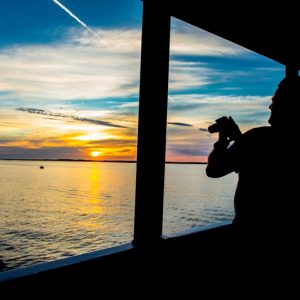 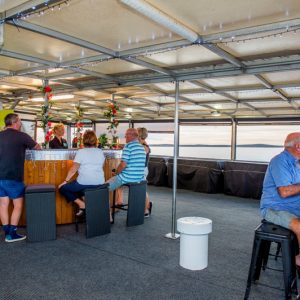 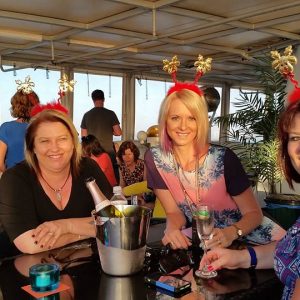 Late summer/autumn has seen some of our best Abrolhos Island cruises ever. Thanks to the great customers that took up our 5 day eco wilderness adventures, we couldn’t have done it without you. Our customers came from far and wide, all enjoying the fantastic fresh seafood that they caught themselves, prepared and cooked by the Captain AKA me and Ray Tate the on board Chef. We did everything we said we would do on the itinerary with the majority of the groups with the weather only hindering us on a few occasions. The crayfish this year were thick again with average catches from our 6 amateur pots, around 6 to 10 crayfish per pot on most pulls with some exceptions up to 22 crays in a single pot. Fishing is always good and if you asked Ray the Chef he will tell you he has had a backup meal ready to cook each trip on the first day just in-case we fail to catch dinner. Ray has yet to cook that back up meal fortunately for my reputation. Squid have been slow and small for the first few trips until the last 2 months where the squid grew into monsters and we had more than enough for everyone to eat. 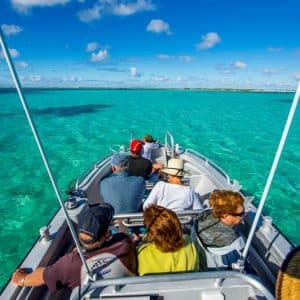 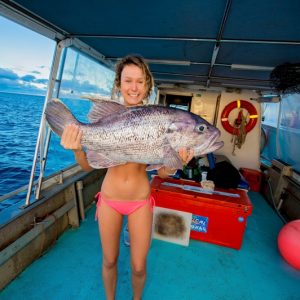 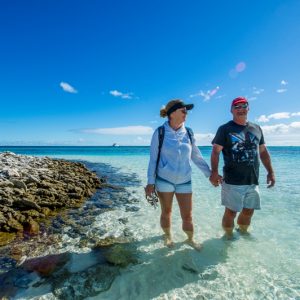 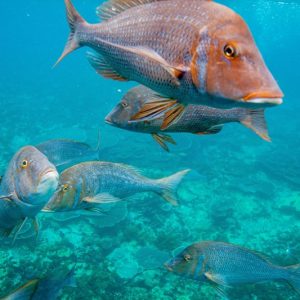 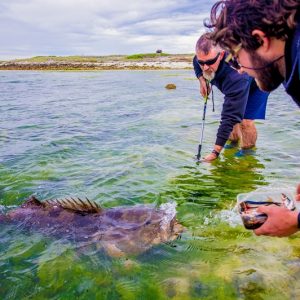 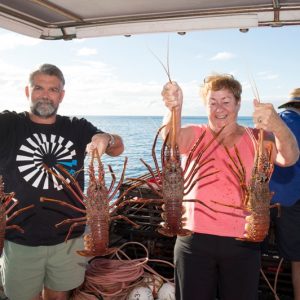 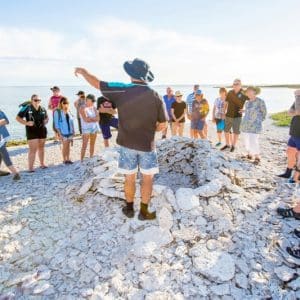 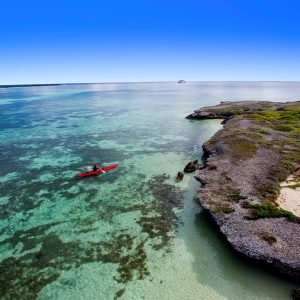 Batavia wreck site was awesome as usual with the weather working in our favour for nearly all the trips we had except the last one as the swell got too big to snorkel it. That was unfortunate for those guests but for all the other trips everyone was ecstatic about snorkelling on the Batavia wreck site some even wanting to go back for a second snorkel. Of course it wasn’t all about the remains of the ship but the abundance of fish life that surrounded the area, some say they are the reincarnated spirits of the many people lost from the infamous mutiny and shipwreck itself which took  over 150 lives back in 1629. The coral trout, Baldchin groper and crayfish that abound the wreck site are certainly well fed so if it is the dead reincarnated they are having a better life than the one lost over 350 years ago. 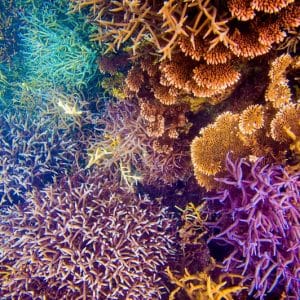 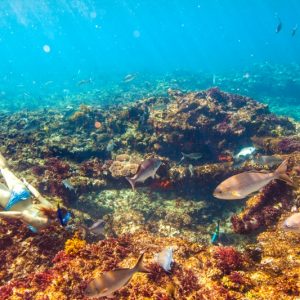 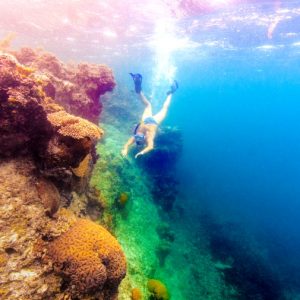 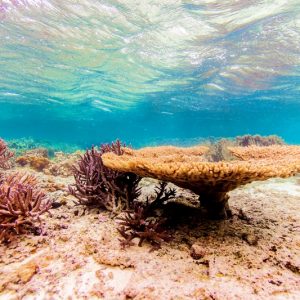 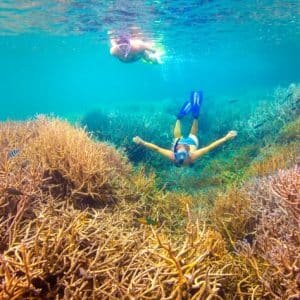 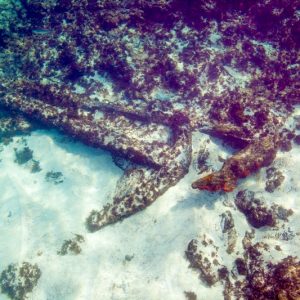 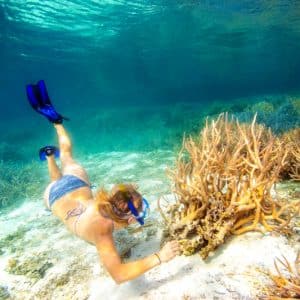 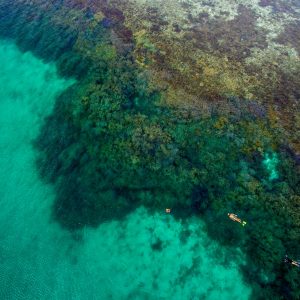 Beacon Island or the Island of angry ghosts where 126 men women and children were brutally tortured, raped and murdered has a very eerie feel about it without the fisherman’s camps on it. As part of the W.A. museum and Department of Fisheries planning the fishermen who used to live and work from Beacon Island were relocated and the camps pulled down so the Museum could undertake their archeologic digs in which they recently found another four skeletal remains. As we walked the Island it was scary to realise that up to 300 people were marooned on such a small barren island, nowhere to run and hide from the murderess mutineers. On the other hand the bridal terns were amazingly friendly as they nest amongst the low lying trees you could walk right up to them on the tracks and they didn’t even flinch.

Snorkelling and diving has been first class, just about everyone travelling with us has jumped in for a look as the lure of clear waters, amazing corals and fish life was too much to resist. Others that haven’t taken the plunge were just as excited in the glass bottom boats. Not as many scuba divers joining our trips considering the quality of the sites and the constant 30 to 50 metre visibility all year round. The water temperature has been a steady 23 to 24 degrees.

We did try new spots for snorkelling and diving along the way that were amazing so next season we plan to explore more uncharted areas that have never before been viewed from below the waves by human eyes. Being the only eco tour boat at the Abrolhos we have mostly been all alone in all the areas we visit and knowing the secret locations better than anyone even the local fishermen makes for a real treat for our customers. Just the isolation and being in a wilderness with no crowds has been a winner on its own.

Migratory birds have increased in numbers over the past 2 years with hundreds of thousands nesting back on islands that have been dormant from birdlife for more than 40 years. Lesser noddies, shearwaters, fairy terns and more were abundant blocking the sky from view at times. The ospreys were nesting in nearly all the nests we came across which I haven’t seen in a long time.

Winter was magic with whales frolicking everywhere you look, sealions were exceptionally friendly as we were not trying to swim with them they just rocked up where we were snorkelling and joined in the fun. Dolphins were also in their usual abundance and were constantly fighting for position on the two bows of the Eco Abrolhos as we cruised the many Abrolhos Island groups.

All in all every trip was very successful with everyone raving about the magic that is the Abrolhos.

Our team are really looking forward to next season now with new ideas and places to go and see. One of the benefits of starting a new tourism venture in an untouched paradise is we get to explore and find exciting new areas that have never been seen which is why the crew and I get so excited to show off what’s been hiding in our back yard. So come and join us for an adventure you will never forget.