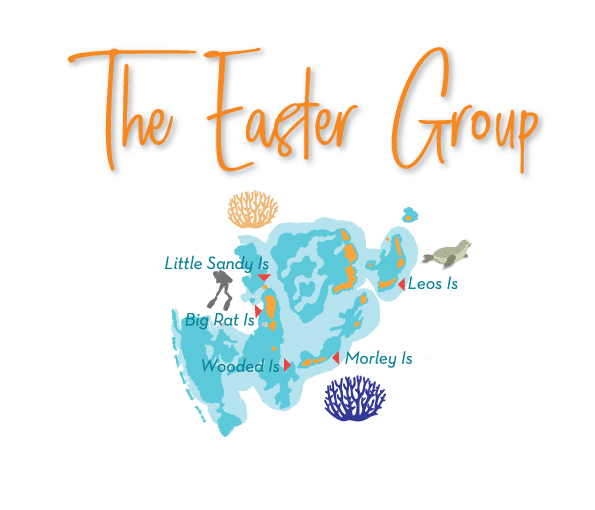 The Eco Abrolhos’s Easter Group mooring is adjacent Little Sandy Island. The small island is surrounded by vibrant coral. There is a channel between the island and the adjoining reef that is perfect for both snorkelling and glass bottom tours. The plate corals along the edge are spectacular and in pristine condition. The island is home to the largest colony of Sea Lions in The Abrolhos. There are about 13 with 2 large male bulls, 6-7 females and a few juveniles that are very active & vocal and a lot of fun to be around. Although they laze around on the sandy beach or on the islands central foliage most of the time, if you are lucky enough they may come for a swim when the snorkellers enter the water. The sand spit at the farthest end of the beach is home to many wading birds. In season there can be up to 15 species all mingling together on the narrow spit. It’s a special place and a really great sunset spot when the weather conditions are right. The female Sea Lions love to dance along to the Van Morrison tunes we play during sunset...... 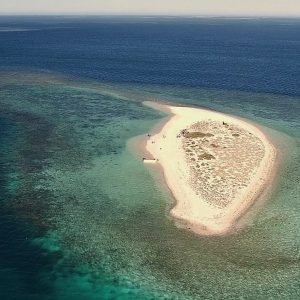 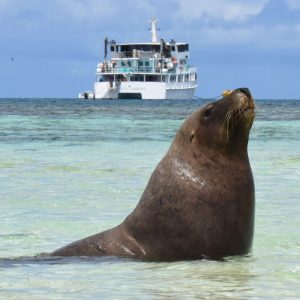 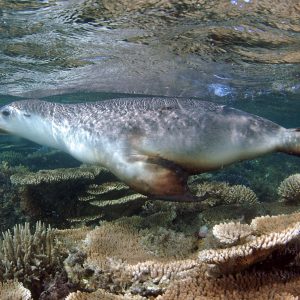 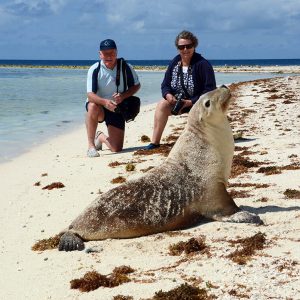 Wooded island is a bird watchers paradise. In season it is home to the endemic Lesser Noddy and is one of only 2 locations they roost in the entire world. Whilst they can be viewed in small numbers all year round, its the bulk of the birds that return in late winter to roost in their 1000’s. This is also the time for breeding and hatching for all the species and in 2018 we watched as Pacific Gull eggs were hatched, then chicks were taken for their first walks and swims. When the Ospreys and Eagles fly overhead, the sky fills with 1000’s of birds as they take flight. Along the stunning sandy beaches are wading birds as well as some very friendly Sea lions. In 2018 the bushes were filled with large Golden Orb spiders which were a bonus. We conduct a guided one-way walk from one end of the island to the other, taking in all the sights that this very special place has to offer. 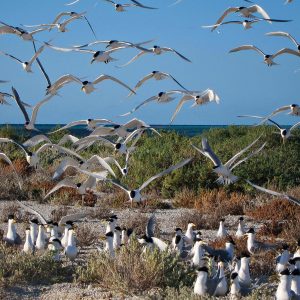 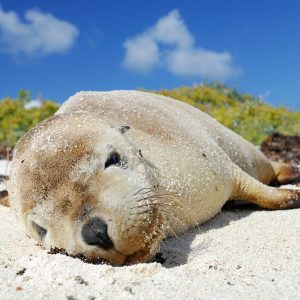 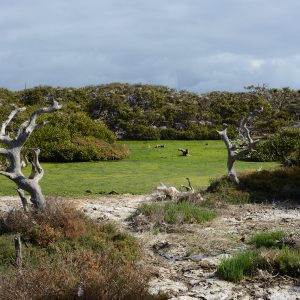 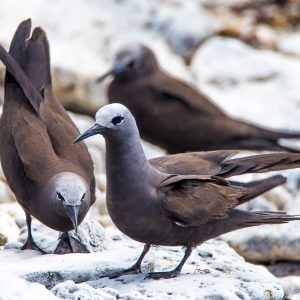 At the end of the Wooded Island walk, guests finish up at the amazing Squid Hole. This area is very difficult to reach by boat and local knowledge is a must to bring a vessel through the maze of shallow reefs. The shallow draft glass bottom tenders are perfect for this job. The snorkel at the squid hole is a quirky one. With reef shoes on, guests walk 50m over coral rubble to the end of the island and enter the water via a carpeted entry. The coral is sparse but its the immense fish life that brings this place alive. You simply drift around the point and finish on the other side where the crew will be waiting with the carpet and shoes. It’s only short but so much fun that many get out, walk across and go and do it again! Glass bottom tours are also an option and you can even try fishing for squid. There are many stories on-board of guests who caught a bucket full of squid at 3pm and by 6pm were eating yummy salt-and-pepper squid with drinks as the sun was setting. 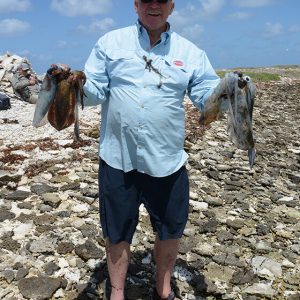 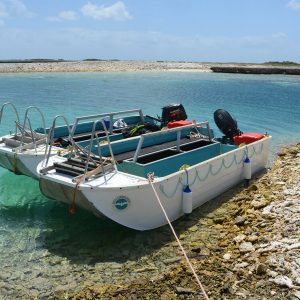 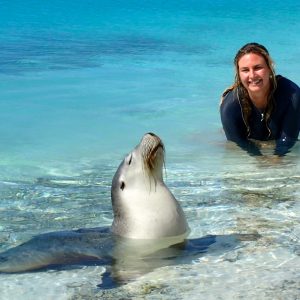 The Anenome Lump is an incredible snorkel and scuba dive. It is a small coral reef system that rises from 40m depth to 8m on top of the reef. The mooring is situated right on the middle of the reef top. Guests can simply jump in off the back of the Eco Abrolhos and the crew put long floting lines for them to hold onto. Within moments large and curious Spangled Emperor and Snapper turn up and swim around the guests. The plate corals on the bottom are huge and add to the spectacle of this location. Glass bottom tours are also an option and fishing is prohibited. 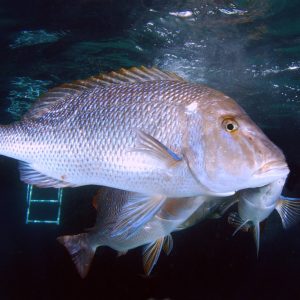 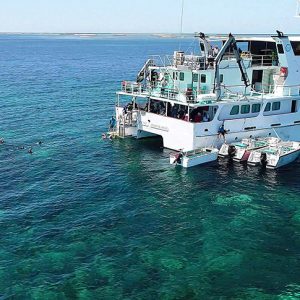 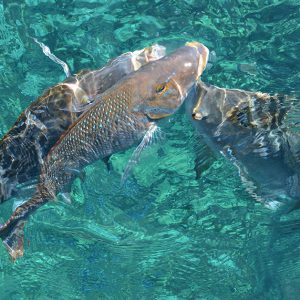 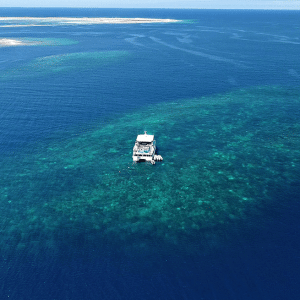 Leo’s Island is an adventure all before we even step foot on the shore! From the anchorage to the shore is a maze of rocky islands, narrow reef passes and a very shallow sandy lagoon all to safely negotiate. From there it’s a walk past some bird nesting sites, a great surf break and 2 cray fishing camps before reaching the stunning and tranquil central bay. The hike to the inner lagoon is only a short one and takes guests around the lagoon edge. The highlight is feeding 2 large land-locked Cod that have grown up in the lagoon. They compete for the food we throw at them with the hungry gulls that hover overhead. Sometimes it gets quite heated between the birds, let alone the 2 Cod! From the lagoon it’s only a short walk to to the edge of the island that faces the open ocean. 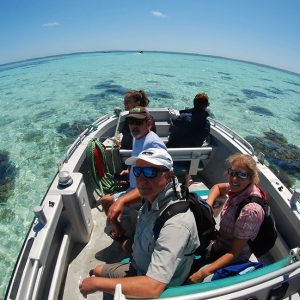 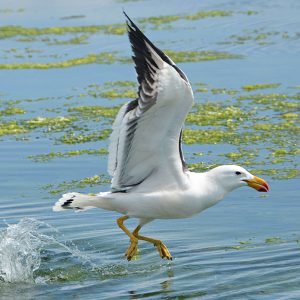 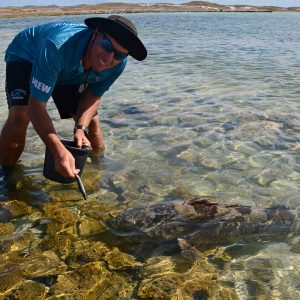 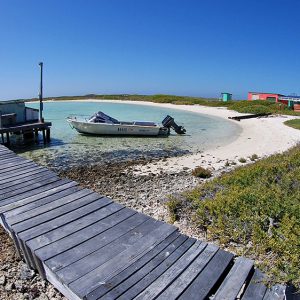 Morley Island from the air is just spectacular! The island has a long fine white sandy beach which is just perfect for sun baking or having a swim. With it’s outer reef drop-off only 25m from the beach, the snokelling is excellent. There is a designated dive/snorkel trail that starts from the corner of the beach and extends out past the rocky headland. The coral right down the wall is vast and in very good condition. This intermediate level snorkel has the potential for bigger fish and well as rays and small sharks. Sea Lions are also popular and some of the best (and longest) interactions have been with the freindly Sea Lions here. They have followed guests for the entire snorkel, then back to the beach and even chased the bubble trails of the tenders propellers all the way back to the Eco. Sunsets on Morley Island are also a special time. 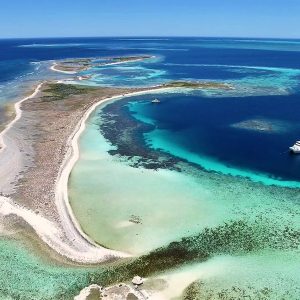 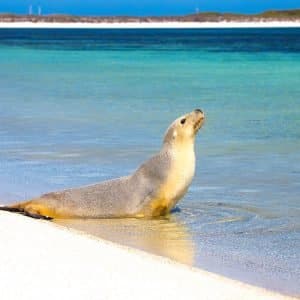 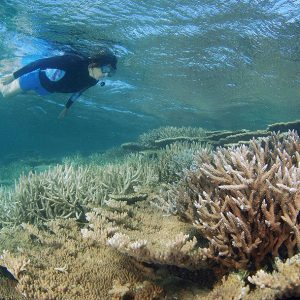 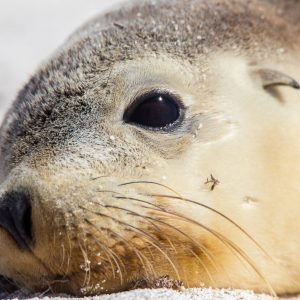 To view all available dates for our Abrolhos Island Tours, view our calendar page